Chronicle of the Reserve's past 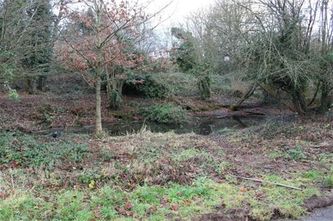 A Tad of Dothill History

The little overlooked pond south of the playground at the bottom of Severn Drive, that is often filled with old tyres, shopping trollies and traffic cones, is, believe it or not, the last remnant of a medieval moat that once surrounded a splendid old manor house.

There are many such constructions in England and they were all created around the 1300s when they became the height of fashion for the “Aristos”. At this time Dothill Park was owned ...by the Horton family, who happened to have been tax collectors. A moat - clearly tax collectors were as popular in those days as they are today!

The moat was slowly infilled over a period of about 300 years, as moats lost their symbolic prestige and the land was reclaimed for building purposes. The south leg of the moat was still completely intact and formed part of the ornamental gardens of the manor house in 1734. The southeast arm of the original moat is fortunately still visible today even though infilling has continued since the area was recorded on the 1967 Ordnance Survey large scale map.

So next time you are out walking with your dog along the tarmacked path beside the children’s park, maybe that little uncared for pool is worth a second glance and just ponder the thought that once it was probably full of beautiful golden carp.

The attached diagram is an excerpt from an archaeological evaluation carried out by Birmingham University in July 1989.

Wellington History Society gave a very interesting talk on the history of Dothill at Wellington Library in March 2017.